Origins in the Anglican Church

All Methodist Christians are connected to the lives and ministries of John Wesley (1703-1791) and his brother, Charles (1707-1788). Both John and Charles were Church of England priests who volunteered as missionaries to the colony of Georgia, arriving in March, 1736. Their mission was a disaster, with Charles leaving the colony in frustration and John upon threats to his life. 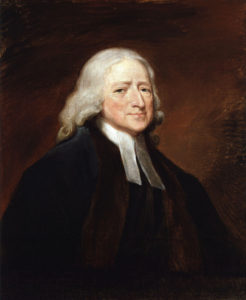 The Wesley brothers had transforming religious experiences in May, 1738, under the influence of Moravian missionaries. John’s experience on May 24 of that year at a Moravian (Dutch Protestants famous for their teachings of grace and Free Will) meeting on Aldersgate Street, London, has a prominent place in the Church’s memory. Shortly thereafter, both brothers began preaching a message of new birth and sanctification in Anglican religious societies and outdoors to whoever would listen. They also established missional and philanthropic enterprises to promote social change.

The goal of this movement was to “reform the nation, particularly the church; and to spread scriptural holiness over the land.” Over time a pattern of organization and discipline emerged. It included a set of General Rules, societies made up of class meetings (small groups in which members of Methodist societies watched over one another), and band meetings (smaller confessional groups divided by gender), all connected by traveling lay preachers.